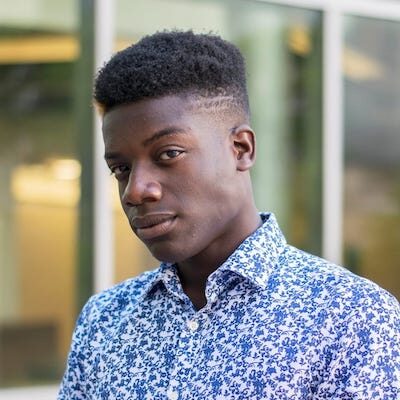 Gnoulelein Tako has been involved in a variety of service activities participating as a LDC Student Staff member with the American Red Cross, serving veterans at the VA Hospital and serving as Co-President of the Black Student Union club at his high school. When recounting his service at the VA, Tako said he aimed to “attack the issue of the under appreciation for those who fought for our country.

Whenever I’m there I realize how little we give back to the people who gave their all for us, and I want to give back as an individual to them.” Through his involvement with the Black Student Union he hopes to educate, inform, and change the masses on the issues of the underrepresented. Stand with all that are not seen despite the struggles. From the homeless youth, to the women from the march, and the Black communities at the events he attends, he hopes to help their issues, and have them be known.

After attending Leadership Development Camp in 2017 Tako wasted no time in putting his leadership skills to use. He continues to help students around him and as a Student Staff member for LDC he ensured other students were “healthily pushed out of their comfort zone in order to grow and discover a new version of themselves, to cultivate them in such a way that they wish to take what they learned and spread it into their own communities.” It’s exciting to see Tako do just that.